The process of writing my first novel has undoubtedly revealed where I fall on the plotters vs. pantsers spectrum. I dove into Lost Girl Road with only a title. I’ve been back-pedaling ever since. Each of us has to discover what version of the creative process best fits our drafting tendencies. Michael Cairns is here to offer advice on how to combine the best of both worlds by being a planning pantser. I also might add that story podcasts he reads on his blog in a crisp English accent are quite addicting.

The Planning Pantser – Unconscious Planning as a key to Increased Creativity.

I describe myself as a pantser whenever asked about my writing process. I do so because I never write any plans down, and I will often begin a story with the first sentence and then paragraph and so on, with no fixed idea of what’s coming next. But I feel slightly disingenuous when I do because the truth is, I’m planning all the time. Whatever manuscript I’m in, I’m living with the characters 24/7.

The plotters vs. pantsers debate will never end. There are arguments on both sides of the fence as to which process, planning or pantsing, is best for creativity. I think they both have merit, but I struggle to plan in any traditional way. I sit with coloured pens and plain paper, an open word doc, some photos, all sorts of things, but nothing comes. However, as soon as I type the first word of a story, ideas explode in my brain. Once I’ve had a brief lie down to recover, I’ll get to work.

I know for some pantsers, the going is considerably tougher. But there are techniques I use that I believe will enhance and expand your creativity a great deal. There are four of the ways in which I do my unconscious planning.

Be your character: I spend as much time as I can with my characters, trying to get in their headspace and think about how they feel in any given situation. I write a wonderful mash-up of fantasy, sci-fi and horror, the only rule being that you have to care about the characters. So I might spend the drive to work deciding how Bayleigh feels about Krystal being given the chance to go zombie hunting with Luke. What does it do or her self-esteem? How does it affect the mother/daughter bond that’s beginning to grow between them? I’m not writing anything down or specifically thinking forward in the story. I’m giving the characters ammunition, so when I do sit down to write, there are already a hundred ways I could go.

So characters keep people reading, but what makes them loathe to put down a book is when the characters are put in a situation that is worse than anything they had already imagined. So Dara may have already found Frank’s wedding ring in his jeans pocket, but did she truly expect his wife to show up at the door? And what’s more, did she expect his wife to be the long lost half-sister she only discovered she had yesterday? (okay, so I don’t write romance, I’ll admit it).

So as you’re sitting on the train, imagine the nastiest thing you could torture your character with and then make it worse. And you can go completely over board with this, because it’s all in your head.

Think of the end. This might sound obvious.  To most planners, it’s probably appalling and shocking that, most of the time, I start not knowing how my story will end. I like it that way. As I progress, so I learn more about the characters and understand where I’d like them to end up. However, if you’re struggling for creativity, knowing the ending can help. I often figure out the finale of a book after the first ten or twenty thousand words and then fill in the gap as I go along. I also think this can help to streamline your writing. My early drafts were often horribly wordy and bloated because I had no defined goal. With an end in mind, you might find your books are shorter because the way to reach that point became clear. As long as your characters have room to breathe and, most importantly, the reader is moved, then the length of the story is irrelevant.

Imagine conversations. This is a fun one. I like to have conversations in my mind (don’t laugh), often about nothing much at all. The fun thing is to have them with your characters, as though you just met them down the pub, or standing on the sidelines at (enter relevant sporting/schooling occasion here). You might talk about the weather, how their latest axe is holding up and what happened to that big meany dragon they were bitching about last week. What happens for me is the character starts spouting off about another character or some quest/mission they were on and all of the sudden I know what’s happening in the next three chapters. I do think it earns me odd looks as I mouth the words to myself while queuing in the supermarket, but it’s a great way to plan unconsciously.

I hope for any pantsers reading that this has helped with your creativity and for any plotters, maybe you’ll be more willing to ditch the outline and dive into the great unknown.  I’d love to know what gets your creative juices flowing so do let us know in the comments below:

Where do you fall on the plotters vs. pantsers debate when it comes to getting any type of writing done? 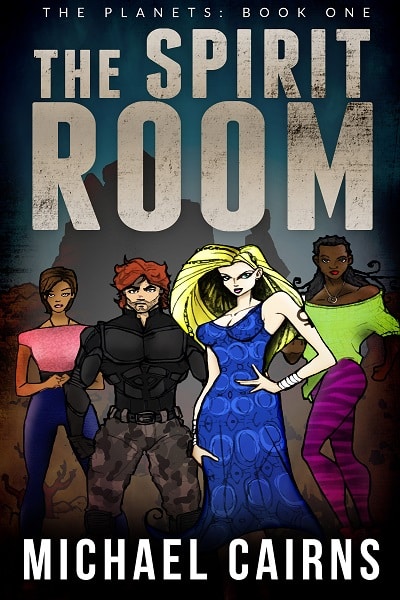 The Planets are a team of superheroes, tasked by an ancient group called The Assembly, to battle an alien foe. The Spirit Room finds the Planets at a crucial point in their battle, with the stakes higher than they’ve ever been and the pressure mounting. However, all is not quite as it seems and the Planets discover there is more to their struggle than they first thought.

You can connect with Michael and his social media sites via his blog Cairns Writes where you can download a free copy of novella Childhood Dreams (A Game of War, Part one), find podcasts, free short stories, info about me, and of course, links to where you can buy his books. You may also be interested in reading the author interview that appeared on this blog.

Chocoholic Michael Cairns is a writer and author of the superhero fantasy series, The Planets and science fiction adventure series, A Game of War. A musician, father, and school teacher, when not writing he can be found behind his drum kit, tucking into his chocolate stash or trying, and usually failing, to outwit his young daughter.

Michael’s books can be found via Amazon, Kobo, and Smashwords.