ONE WAY TO STAY CURRENT on the best in new short fiction and noteworthy authors is to read the yearly anthology Best American Short Stories. This series also includes The Best American Essays and The Best American Travel Writing to name just a few. I’ve read them for years.

The series editor pours through tons of previously published stories from nationally circulated periodicals and then gives a guest editor approximately 100 stories to choose the best twenty or so of the year. The guest editor also writes an introduction that generally ponders the state of the genre. It’s important to note the stories selected in a given year will reflect the tastes of the guest editor. I used to read the anthology from cover to cover, but now tend to pick and choose what pieces to focus my efforts on based on my reaction to the first couple of paragraphs.

I’ve been gradually catching up on the series since moving cross-country and changing my career path made some of my usual reading fall by the wayside. I’m also making an effort to subscribe to a new literary journal every year. This year I focused on The Missouri Review. Next year, I plan to yet another such as Glimmer Train or McSweeney’s.

I first encountered the series in 1999 in undergraduate fiction and nonfiction workshop classes. Every time I finish one, I go back to the table of contents and put a check mark by the stories that left a lingering impression on me as a writer. That way I can later return to them for notes on craft. My experience as a submissions editor for The Idaho Review also helped me immerse myself in this market as well. 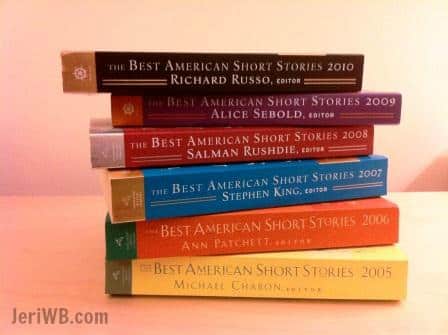 There is no better way to learn the craft of writing than to READ and to WRITE a great VARIETY of writing. It’s much easier to look through the back pages of The Best American Short Stories in print as opposed to the electronic version as a way to find submission info for the literary journals who send their published pieces in for consideration in the anthology.

I’ve gradually been getting rid of many of my print books, this series included. Here’s a list of 10 fantastic stories from the 2005-2009 Best American Short Stories anthologies along with the first sentence from each:

She knew in her heart it was a mistake, but she’d been laid off and needed the cash, and her memories of the Strikers were mostly on the favorable side, so when Mrs. Striker called – Gretchen, this is Gretchen? Mrs. Striker? – she’d said yes, she love to come over and hear that they had to say.

When I was sixteen I was high most of the time.

“Never take you back, son, hard as it break my heart,” Aunt Cleoma had told Rubiaux.

It was through our friend Shirley that we meet the Lalowski boys.

At first, our pack was all hair and snarl and floor-thumping joy.

Archie and Rose Mclaverty staked out a homestead where the Little Weed comes rattling down the Sierra Madre, water named not for miniature obnoxious flora but for P. H. Weed, a gold-seeker who had starved hear its source.

Your father picks you up from prison in a stolen Dodge Neon with an 8-ball of coke in the glove compartment and a hooker named Mandy in the back seat.

In October, the men and women of Sorrento harvest the primofiore, or “first fruit,” the most succulent lemons; in March, the yellow bianchetti ripen, followed in June by the green verdelli.

“Where Will You Go When Your Skin Cannot Contain You?” By William Gay (2007)

But even in anthologies that aim to publish the best of the best, not every story will connect with every reader. Half of the time, I think it’s the search for an extraordinary story that keeps me reading. What I do know for sure is availing myself to these anthologies keeps me on my best reading and writing toes. A writer who does not read much is a dangerous thing.

What magazine, literary journals, or online sites do you rely on to read fiction, creative nonfiction, and poetry?

Permission must be granted by JeriWB to use the stack of books image in this post.