“Hunters in the Snow” by Tobias Wolff #ShortStory

Great stories need to be filled with memorable characters and those characters need not necessarily be likable. “Hunters in the Snow” by Tobias Wolff appears in the author’s collection In the Garden of the North American Martyrs. Literary realism’s focus on everyday people and situations stands in stark contrast to works that present a more romanticized version of life. Wolff’s fiction takes genre matters a step further into the minimalist style of dirty realism with its focus on life’s less pleasant aspects.

The simple plot and broken characters of “Hunters in the Snow” occupy a spot on the list of short stories that have influenced my writing style. The story focuses on three men who take a hunting trip outside of Spokane, Washington. Needless to say, they don’t shoot any deer and their bumbling ways keep the reader riveted. The opening line, “Tub had been waiting for an hour in the falling snow,” immediately conveys a lack of responsible behavior. It becomes clear that the truck’s heater is broken. Once on the road, they stop twice for coffee before they finally making it late to the woods. 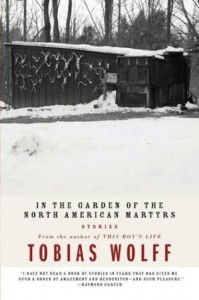 Most of the character magic in “Hunters in the Snow” comes from how Tobias Wolff reveals character through dialogue. The following excerpt helps provide a sense of the story’s excellent use of dialogue to establish character. It’s also important to note the story is told from a third-person objective point of view. The reader is not allowed access to the characters’ mindset. Surface detail and actions are used to carry the story.

When they were coming up to the barn Kenny stopped and pointed. “I hate that post,” he said. He raised his rifle and fired. It sounded like a dry branch cracking. The post splintered along its right side, up toward the top. “There,” Kenny said. “It’s dead.”

“Knock it off,” Frank said, walking ahead.

Kenny looked at Tub. He smiled. “I hate that tree,” he said, and fired again. Tub hurried to catch up with Frank. He started to speak but just then the dog ran out of the barn and barked at them. “Easy, boy,” Frank said.

“I hate that dog.” Kenny was behind them.

Kenny fired. The bullet went in between the dog’s eyes. He sank right down into the snow, his legs splayed out on each side, his yellow eyes open and staring. Except for the blood he looked like a small bearskin rug. The blood ran down the dog’s muzzle into the snow.

They all looked at the dog lying there.

Kenny turned to Tub. “I hate you.”

Tub shot from the waist. Kenny jerked backward against the fence and buckled to his knees.

They use the phone at a nearby house only to find out the closest hospital is over fifty miles away and its ambulances are all being used elsewehre. Frank and Tub use a board to carry Kenny back to the truck, but in typical style they drop him along the way, causing his already tender stomach wound to hurt even more.

Once back on the road, Tub utters an ominous line. “’That’s true, Frank. You don’t pay attention very much.’” Frank then announces his hands are freezing up. He and Tub end up stopping not once, but twice to get warm. Each time, Kenny must wait in the cold truck bed. In the meantime Frank and Tub share conversation that offers insight into their miserable lives. At no point does Wolff lead his readers to judge the characters. The third-person objective viewpoint allows the reader to come to their own conclusions regarding what makes these men tick.

Tub delivers an ironic line about the dog near the story’s end. They keep driving through the dark on the slick and snowy roads. Kenny is still conscious and thinks they’re still headed to the hospital. The story ends abruptly, wrapping the reader in dread for what’s to come.

What unlikable but memorable characters from the page or screen have captivated you?