How accurate should truth in creative nonfiction be? After all, truth is truth. Or is it? Even a story based on the truth still ends up being constructed using the same literary devices used to craft fiction. The recent release of Bohemian Rhapsody is a great example of how the timeline of real life can be shifted around to build momentum in a story. The biopic’s finale makes the Live Aid performance come across as a triumph after Freddie Mercury is diagnosed with HIV. In real life, he didn’t find out the status of his health until a while later.

In some nonfiction circles, such shifting of events would be considered dishonest. Yet, the essence of the band’s story is kept in tact, the greater overall truth still accurate. On the other hand, some would question the decision to recreate most of the band’s iconic Live Aid performance at the end of the movie. What purpose does it serve the narrative to mimic such a historical performance exactly? As this movie example reveals, rendering truth in creative nonfiction is rife with sticky points.

Rendering the truth in creative nonfiction is an art form. Crafting a narrative involves shaping material to tell a real life story using the same literary techniques as fiction, but the story must be factually accurate. Whereas fiction begins in the imagination, creative nonfiction springs from actual events. Any writer who wants to coax a story from life’s seeming chaos has many choices to make.

Memory is a fickle thing. People often don’t remember things accurately, and time can further erode or shift memories as newer influences come into play. A detail might be remembered inaccurately, but it’s still true to the writer’s memory. This raises the question of whether realizations of erroneous recollections should be alluded to as an equally important part of the narrative. The role of truth in creative nonfiction is also further complicated by how no two people will recall an event the same way. 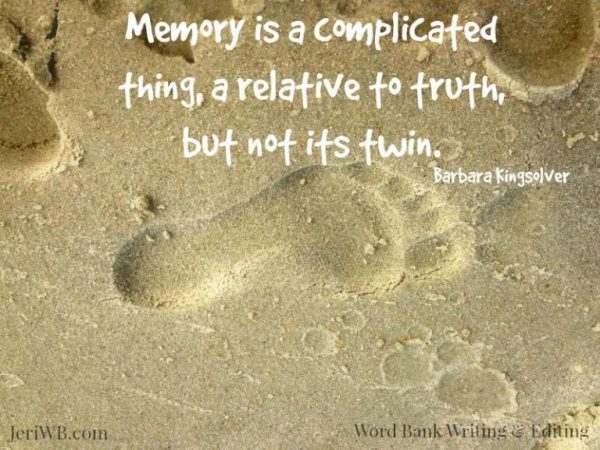 Everyone experiences reality differently due to the subjective lenses they encounter the world with. A person’s unique backgrounds and beliefs act as a filter used to process events, and lifetimes are spent building frames of reference. Even the words chosen to describe an event shape its perception by an audience. The rendering of subject matter varies depending on the discourse community it’s intended for. It’s necessary to consider the goals and purposes of the particular group the text must reach.

Bringing together the main traits and influence of two or more people into one composite character might be done to protect the so-called innocent or for the sake of supposedly streamlining the number of people in narrative, but doing so brings into question the ethics of doing so. Conflating characters might be done with the intention of strengthening the story, but as it shifts the focus into the imaginary realm.

Once a writer feels compelled to add details that were not part of the story, the motivation for doing so must be questioned. If the intent is to use imagined details to arrive at a greater truth, why not just write fiction since it can also communicate larger truths about the world? On the other hand, is it any more acceptable to simply not mention something by leaving it out entirely? Another tendency may be to compress time to speed up the story.

Rendering the truth in creative nonfiction is an art form.
Powered By the Tweet This Plugin

What are your thoughts on truth in creative nonfiction?

This post originally appeared as a guest post on D.G. Kaye’s blog. You may also like reading Pitching to Literary Agents at a Conference or Determining Your Book Publishing Goals.