Chances are you have seen the 1982 movie The Man from Snowy River. The film tells the story of down-on-his-luck Jim Craig who falls in love with a rich rancher’s daughter in the 1880s Australian frontier. Romance and conflict ensue as the plot unfolds. The outstanding cinematography coupled with a beautiful piano score make this a memorable movie. Yet, did you know the famous ten-minute chase scene is inspired by a poem?

Thanks to the movie’s credits, I long ago realized the movie was based on Banjo Paterson’s famous poem, but it wasn’t until I developed a poetry unit for students at a rural high school that I sought out the poem to read. As it turned out, Australian Bush poetry is a big hit with a student population raised around horses. Other well-known works by Paterson include “Clancy of the Overflow” and “Waltzing Matilda.” It wasn’t until last month that I sat down to read the poet’s collected works. Many of Paterson’s poems are much like “The Man from Snowy River” in subject matter and style. I found the user-friendly poems refreshing and many lines made me chuckle. While enjoyable, the subject matter does get a bit repetitive at times. 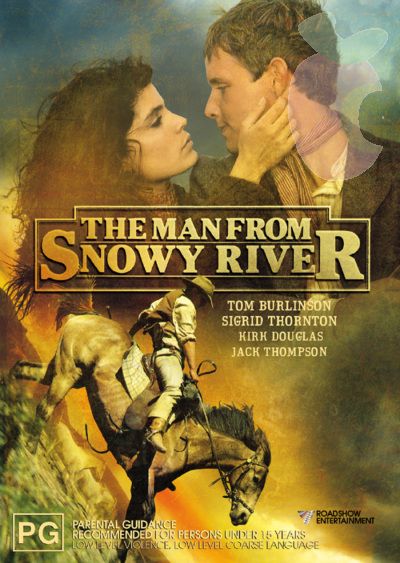 Paterson wrote “The Man from Snowy River” as a ballad. Such narrative poems that tell a story in verse have existed since before literacy was common. The meter or rhythm of the lines would make them easier for poets to remember the lines during a peformance. Often musical accompaniment took place as well. It’s been theorized that these type of ballads became popular in Australia in the late nineteenth- and early-twentieth century because life lived on a frontier often finds people in need of making their own entertainment. The settlers came from England, Scotland, and Ireland and the familiar ballad form simply evolved to reflect life in a new environment.

I’ve included the movie clip below that contains the lines of the poem read to accompany the action on the screen. If you would like to read the entire text of “The Man from Snowy River” please follow this link. Note how the lines of each stanza are written in an alternating rhyme scheme where every other line rhymes with the one before it.

There was movement at the station, for the word had passed around
That the colt from old Regret had got away,
And had joined the wild bush horses – he was worth a thousand pound,
So all the cracks had gathered to the fray.
All the tried and noted riders from the stations near and far
Had mustered at the homestead overnight,
For the bushmen love hard riding where the wild bush horses are,
And the stockhorse snuffs the battle with delight.

I hope you are enjoying these posts for National Poetry Month and that I can bring a bit of my love of poetry into your lives.

Have you seen this movie? What is your reaction to the poem?

The DVD cover used in this post is for promotional use only and follows fair use guidelines.