#AuthorChat: Margaret Atwood “Expression and the Power of Words”

Boise is a fairly literary community. I know, I know… like a good majority of the country, you might equate Idaho with such things as potatoes and skinheads. But wait, there’s more! As in Margaret Atwood came to Boise State University last week as part of their distinguished lecture series. What’s not to like? Free parking, no tickets required, and a literary rock star known near and far for her novels, poetry, children’s literature, and nonfiction. Sign me up already.

Upwards of 1,400 people packed the Jordan Ballroom to hear Margaret Atwood deliver a talk titled “Expression and the Power of Words.” Before starting into the topic, reference was made to her legion of Twitter followers. This pleased me to no end as I made a point to send her a tweet the day before. And she tweeted back to me! A mere blip in the fast and furious pace that is Twitter, but words directed at me from her nonetheless. I’ve since memorialized that short exchange in the screenshot below. 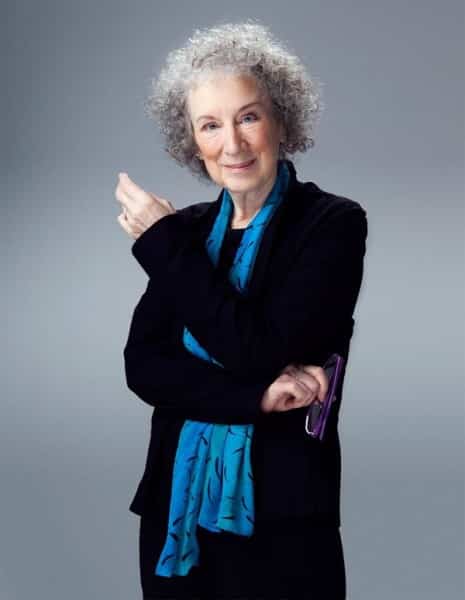 The lecture started off with some humorous jabs at the recent controversy caused by the Clean Reader app. Thanks to this app, readers can decide if they want their books clean, cleaner, or squeaky clean. Margaret Atwood pointed out the unintended humorous effects the app could cause like chicken breasts becoming chicken chests, or a child suckling a breast would now be suckling a chest. Such apps disregard an author’s intended effect. Their existence raise questions as to who owns a piece of writing and who has the authority to change the text.

The set-up led to a reading from a passage from Faust where the title character is speaking with  Mephistopheles. The author read both passages complete with her hand cupped to the microphone to achieve a voice-of-doom. As you can imagine, the effect just wasn’t quite the same when damn became darn and hell became heck. Yet, such is the world we live in where so many are offended by such words. Many would say language is secondary to story, but words are a writer’s tools. When chosen carefully words can convey a particular tone, characterization, or shade of thought that squeaky clean language simply cannot.

She managed to mix irreverence with a good dose of seriousness. When it came to tidbits about her writing process, she mentioned giving a draft of Oryx and Krake to a couple of teenage boys to read. The boys gave pointers about joints as well as noting, “Nobody says ‘what in the fuck,’ your character needs to say ‘what the fuck.'” And there you have it folks, Margaret Atwood is not afraid to drop an f-bomb in the middle of a distinguished lecture. All the better to prove the point of her speech, I say.

Words are coined on a regular basis or re-purposed. The fashion industry used the word taupe in the 1930s–after all nobody wants to buy the same shade year after year, so why not pick a similar one with a different name to help buyers feel they are getting something new and trendy? The downside comes when we have fewer words at our disposal because if we don’t have the right words, our thoughts are limited to the words on hand. Yes, we will always have emotions, but it’s the power of words that allows us to capture so many shades of meaning. George Orwell more than anyone foresaw the twisting of language to achieve political ends as well as a tool for shutting down thoughts.

What makes a story stand the test of time? That is anybody’s best guess, but Margaret Atwood is the first author chosen to contribute a text to the Future Library in Oslo, Norway. In 2114, the manuscripts will be printed on the paper made from trees specifically planted for the project. What will readers make of a text written a hundred years ago? Will her words still convey the intended effect?

Margaret Atwood is not afraid to drop an f-bomb in the middle of a distinguished lecture.
Powered By the Tweet This Plugin

Are you a fan of Atwood’s work? What makes you believe in the power of words?

The author photo used in this post is for promotional purposes only and complies with fair use guidelines.