“Live Oak, with Moss” by Walt Whitman was never published as a cohesive set of narrative poems. Instead, the poet incorporated the pieces into “Calamus” and Leaves of Grass. This paper was written while I was in a graduate research methods class with Steven Olsen-Smith, who is a noted scholar of Walt Whitman’s and Herman Melville’s work. His research pieced together the original sequence of poems that detail a same-sex relationship in the poet’s life.

It’s been a pleasure to bring my readers these literary criticism pieces from time to time over the years. This is likely to be the last one, as most of the others left in my files are not worthy of publication. I enjoy such scholarship immensely, and had my life went down a different path, I’d probably be a literature professor at a university rather than the freelancer you see here.

The poetic sequence “Live Oak, with Moss” by Walt Whitman provides undeniable evidence that America’s favorite bard writes from a homosexual perspective. To fully appreciate the sensuality present throughout Whitman’s work, it is necessary to acknowledge all human drives and needs by adopting Whitman’s open-mindedness based on the here and now of our shared physical reality. Life’s complex questions cannot all be answered; to think otherwise would be foolish, and to judge others harshly the most foolish of all. Whitman speaks for the multi-faceted nature of humanity. In the 1855 first edition of Leaves of Grass, he writes, “Do I contradict myself? / Very Well then… I contradict myself; / I am large… I contain multitudes” (1314-1316).[1] We all contain multitudes that should endear us to one another instead of drawing lines of separation.

Whitman’s recollection of a homosexual love affair in the “Live Oak, with Moss” sequence speaks to anyone who has ever experienced the highs and lows of love. Because the poet renders love emotions so eloquently, it becomes more necessary than ever to appreciate the poet’s message that all of mankind love one another and embrace their contradictions (all too often imposed by societal inhibitions) if they are to ever realize the limitless potential that stems from man’s commonalities rather than focusing on perceived dissimilarities. Within the poems of  “Live Oak, With Moss” Whitman portrays homosexual love in a way that induces the truly open-minded reader to move beyond singling the poet out for exposing his sexual orientation. Rather, the love Whitman writes of could be that of any relationship.

Love cannot be separated into tidy boxes. Gay love is too often branded as love that is somehow different than heterosexual love, and God forbid if a homosexual should be capable of platonic love. After all, plenty of people still feel that homosexuality must be aberrant and of a solely prurient nature. Love is love is love, but not in everyone’s eyes. Studying “Live Oak” could do much to enlighten our understanding of the nature of love. Unfortunately, scholarship on “Live Oak, with Moss” has been virtually nonexistent. Only until recently has its significance to Whitman studies received much attention. Thus far,  “Live Oak’s” treatment has fallen prey to the two extremes associated with homosexual love: shame and pride.

Alan Helms’ reading impedes the full breadth of Whitman’s poem because of a preoccupation with the perceived shame that Whitman experiences. In poem four, Whitman writes of “other men, in other lands, yearning and pensive” (5).[2] Helms’ interpretation views the poet as “pining for men” as well as being “a conventional homosexual fantasy in which the world is conceived as a hospitable place for same-sex lovers” (para. 9).[3] Helms’ emphasis on sexual implications demeans Whitman’s capacity as a poet since feelings of shame do not correspond with advocating a more tolerant society. If Whitman’s poem were solely about shame, such optimism could not come through. 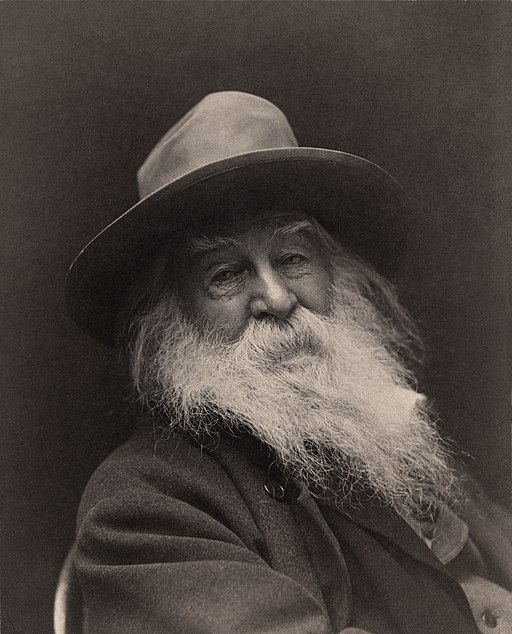 The thoughtful tone of the fourth poem opens up the sequence to global proportion asking the “what ifs” of a better world. Whitman points out, “It seems to me they are as wise, beautiful, benevolent, as any in my own lands; / O I think we should be brethren—I think I should be happy with them” (4-5). Whitman contemplates a better world filled with humanity’s potential for goodwill toward each other. Possibly, that would lead to a world more accepting of homosexuality, but where in the fourth poem is any sexual connotation? The brotherhood of man need not be unduly sexualized or be made a thing of shame.

Another poem within the sequence also speaks out for a more inclusive love. The sixth poem puts forth the image that human connection on any level captures the imagination. Whitman takes on the role of observer from afar. In keeping with ambiguous scenes in which the reader can draw a multitude of inferences, we can read the men on the pier as expressing either platonic love or sexual love (better yet, a mixture of both). Perhaps Whitman’s role as observer when turned on the reader shows how people like to read a lot into most situations. Consider the following: “The one to remain hung on the other’s neck and passionately kissed him” (5). Is that a portrayal of a public display of affection sexual? Passion in this sense could be the desperation of a parting father and son, or it could be the embrace of male lovers. In either case, Whitman keeps the imagery pointed back to the reader as if to say, “If in this you see brotherly love, than what is wrong with also seeing more manly love in the same embrace, for they are one in the same.”

At the other end of Helms’ reading of “Live Oak” as Whitman’s shamed struggle over exposing his sexual identity lies Hershel Parker’s interpretation of a celebration of homosexual self. Parker views the sequence as “an ultimately triumphant account of the poet accepting his homosexuality and surviving a thwarted love affair” (para. 20).[4] Parker condemns Helms’ reading because Helms uses the comma-free version of “Live Oak, with Moss” that he extracted from the 1860 version of “Calamus” (para. 12). Parker also expresses concern over Helms’ reading since it may impede the significance that Whitman’s poetry holds, especially for adolescents who are faced with coming out (para. 26). Even though Parker and Helms make pertinent points, they don’t allow room for the greater ambiguities in Whitman’s poem—the ambiguities that make his poetry so refreshing and applicable to so many readers.

The second poem presents the image of the moss-covered oak tree. In this poem from which the sequence takes its title, Whitman presents the reader with yet another contradiction as he writes, “all alone stood it” (2). Yet, in spite of such perceived loneliness, he also writes of the tree “glistening out joyous leaves of dark green” (3). But the tree isn’t really alone. Its mossy companion adorns those happy leaves. The moss is of a completely different nature than the tree but they exist in a relationship nonetheless. Whitman sees the tree as “standing alone there without its friend, its lover” (5). All the while the imagery of moss drenching every branch of the oak conjures up an intimate picture. Much like homosexual love, the moss and the oak should not be together in a happy coexistence, but they are.

Another contradiction in viewing the tree as all alone occurs when Whitman plucks a leafy branch from the oak and he “twined around it a little moss” (6) before he takes it home to his room where it “remains to [him] a curious token” (8). Even though the poet says he can’t imagine a life without his lover, when he visits the tree he is alone and not distraught over being so, nor does he seem overly lonely.

Poems five and seven both contain elements of Thoreau-like concern about surface meeting surface in human affairs. In poem five, Whitman begins, “Long I thought that knowledge alone would suffice me” (1) as he ponders what wisdom really is. Then he turns to more concrete matters and “the Land of the Prairies engrossed” (2) him. Whitman explores the drive for purpose in life and decides his “life must be spent in singing” (4). However, the only real thing he can eventually find joy in is in loving another person, so much so that he ignores his self for the other, “I am indifferent to my own songs—I am to go with him I love and he is to go with me” (12). Whitman has weighed his options, and the deepness of true love overwhelms the rest.

Whitman puts surface concerns further behind him in poem seven. Once again he directs our perceptions and writes, “I will inform you who I was underneath that impassive exterior—I will tell you what to say of me” (3). Before being a poet, he is a lover and Whitman’s friend knows the true Whitman who has a “measureless ocean of love within him—and freely poured it forth” (6). Together they are happy and though Whitman mentions the rest of the world, while in love he can brush it aside.

Like all love affairs, good times don’t last and jealous heartache sets in, and questions of the worth of such love soon set in. The final four poems in “Live Oak, with Moss” encapsulate the sentiments expressed in the prior poems, but in a somewhat terse tone. Poem nine contains more dreaming of a better world while poem ten contains more yearning for a loved one. The final two poems shift from the more dreamy optimism to more dire reflection. In poem 11, Whitman notes “toward him there is something fierce and terrible in me” (3). That terribleness cannot be specifically known since Whitman “dare not tell it in words—not even in these songs” (4). The final poem ends the sequence with Whitman emphasizing relationships—teacher, pupil, friend.

Scholarship on “Live Oak, With Moss” is sure to continue. It’s a disservice to read “Live Oak” with such fervor focused on Whitman’s sexual identity since he will always be the poet of the people. Homosexuality produces emotions no different than heterosexuality and to focus on the polar opposites of shame and pride still keeps readers from acknowledging the real significance of Whitman’s poetry. As a member of a marginalized portion of society, Whitman’s observations are bound to come under greater scrutiny. Now that his homosexuality can be more openly discussed thanks to “Live Oak” readers will be called on to dissect his sexuality before hopefully arriving at the conclusion that Whitman now, more than ever, speaks for humanity’s best possibilities.

Walt Whitman will always be a poet of the people. #poetry
Powered By the Tweet This Plugin

Are you a fan of Walt Whitman’s work? What about his poetry compels or repels you?