#AmWriting: What I Write…

When it comes to what I write, I’d like to think that I write contemporary fiction, but time will tell since my first attempt at writing a novel started to take on elements of paranormal mystery. I didn’t set out to write a ghost story, and I am not a fan of genre fiction, but alas the first draft of Lost Girl Road veered into paranormal territory. After a year of toiling, I put the novel to rest, but I would like to try my hand at writing the story again, and I want it to be a story of literary merit.

So what do I write? The answer remains elusive, but over the years I’ve dabbled in many forms and focused on a few, especially literary short stories as that is what a writing degree or two instills in many wanna be authors. I’ve also a particular liking for crafting personal essays. I know I have a memoir in me and am fascinated by the use of truth in creative nonfiction. At times it feels like I’ve spent more of my life thinking about writing than I have putting actual words on a page. Don’t get me wrong though, writing is and will always be my greatest aspiration. It’s time to stop joking that I help people write books but can’t seem to write one of my own. 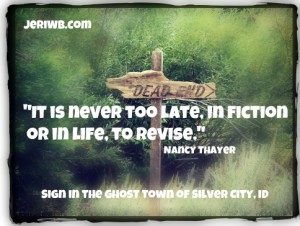 As a child, I told stories to anyone who would listen, including stuffed animals. My first written stories dwelled in fantasy. Two of those stories took me to the annual Young Writers Conference at Eastern Washington University. Both early-elementary age trips have melded in my mind, but the experience of tons of kids coming together to share stories and listen to authors read their work made a lasting impression, as did a kid named Killian who ate crumbs off the carpet. Yes, even then, my young and narcissistic writer’s mind assured myself that my “Voyage to Loob” was better than the stories offered up by the rest of the pack.

The two books I started writing in middle school and high school could best be categorized as V. C. Andrews knock-offs. The first was written in a spiral bound notebook. The second was pounded out on an electric typewriter. I finished neither and both found homes in the trash can. Then Anne Rice’s books influenced the creation of darker short stories that I typed at my first computer.

The first two years of college saw little creative writing, but I gave every wretched academic paper my all. Then I spent the next two years out of school and working in national parks. I was certainly living it up, but not writing it up. It wasn’t yet time to devote a space in my life solely to writing, but those formative experiences provided great literary fodder that I will be able to mine for years.

The types, amount of, and length of time I spent writing during three years of graduate school (I switched degree paths) cannot be encapsulated here, but I fondly remember one class where the professor required the students to compose their history as readers and writers. In short, I discovered a penchant for humorous travel writing and literary nonfiction. I grew less attached to short stories, but better at all elements of craft. Woot, woot. I’m a trained writer who never mustered the courage to try to get anything published (expect for a couple of minor things as an undergraduate). Working class roots overpowered the dreamer in me and I took up a career in the classroom.

Enter the dark ages. Six years of successfully teaching high school English came at the expense of not chasing my writing dreams. I’ve reconciled that I’m not an Energizer Bunny type of person who can do it all.  A cross-country move due to my now ex-husband’s new job allowed me the chance to write eight hours a day, which I split between blogging and drafting my novel. I think I can, I think I can…

I thought I could… As I update this post, I’m ready to spend the coming months of 2019 brainstorming and outlining possibilities for the next draft of Lost Girl Road.

2019 Update: Getting My Act Together

I also got a hiking and relationship piece titled “The Higher Your Get” published in the March 2018 of Idaho Magazine in addition to winning first place in the 2018 Idaho Writers Guild essay contest with my piece on Yellowstone titled “Earth’s Stew.” Little by little, this editor’s writing house is getting in order. As much as I’d like to delve into a memoir about the last four years of my life, that is going to have to wait. I intend to work on short pieces though that may eventually become part of a longer memoir.

I know I have at least five novels in me that I’d like to write. They may or may not turn out to be psychological suspense. I won’t know if I don’t try. I’m finally reading to try. Becoming a freelance editor and amassing a ton of blog posts on writing, editing, publishing, and marketing has really been all about me taking the long way around to coming into my own as a writer.

What do you write? How together is your writing act? #WritingLife
Powered By the Tweet This Plugin

What do you write?

If you enjoyed this post, you may also enjoy reading How to Establish Writing Accountability or Why I Write…