A public reading by author Charles Frazier from his novel Nightwoods was one of my first solo-outings shortly after moving to Charlotte, North Carolina. To hear an author read with the cadence only they can give their prose is a treat that lingers when one sits down to read on their own. 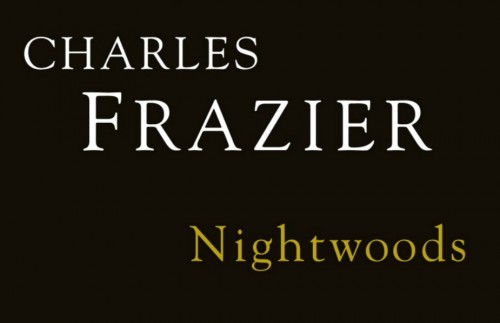 For a tall man of somewhat medium build, Charles Frazier is surprisingly soft-spoken, but he did eventually use the microphone provided as he proceeded to weave together wonderful personal anecdotes and snippets from Nightwoods. Frazier prefaced the book by asking who had already read it and only one person raised their hand. He promised not to spoil the plot and jokingly told the audience to stay away from the customer reviews on Amazon that give everything away.

Nightwoods is only 260 pages, much shorter than his two previous historical fiction novels, plus it takes place in the 1960s. Frazier mused that the period would be contemporary to those readers who had lived through it. The plot centers on Luce, the reclusive protagonist who is the caretaker of an old Appalachian lodge. Her sister gets murdered and Luce starts to care for her sister’s mute and emotionally disturbed twins. Later on, the dead sister’s husband shows up once he is acquitted of murder. It’s safe to say things must get pretty intense at that point. 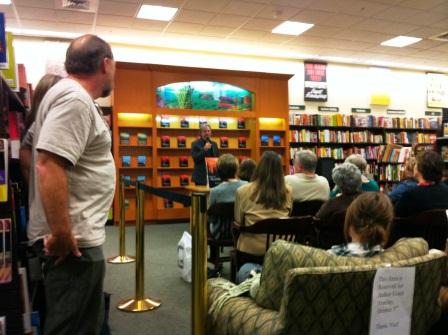 The way a writer can turn a single, seemingly disconnected image from their life into a complete world unto itself stands as the true test of the torture and beauty of the writing process. Frazier shared that at first all he knew about Luce is that she listened to a radio station out of Nashville late into the night. That become one way she dealt with her isolation. He also divulged that eighth grade students used to be taken on a field trip to the Craggy Correctional Institution near Asheville, North Carolina to see the room where the prison sentences of death row inmates inevitably carried to completion.

Furthermore, the author touched on how it helps him visualize the action he will be writing about if he can go to the physical space where that scene will carry out. Somewhere in the mix he also touched upon moonshiners, his admiration for the people-intensive movie-making process in regards to Cold Mountain, as well as his muddled writing process. 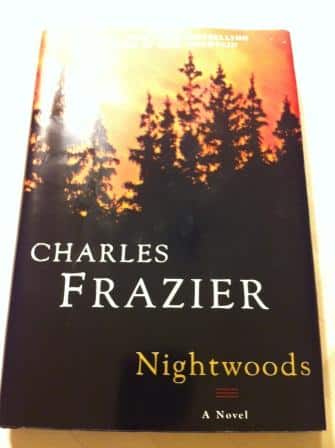 For instance, he said there may be some writers that send off every 10 pages they write to their editor, but it might be three years before his editors get to read anything from him. At the time of writing Cold Mountain, he said the odds of getting a first book published were something like one in 250. I wonder which way those odds have swayed 15 years later?

The appeal of Frazier’s past writing for me in Cold Mountain and Thirteen Moons is how deeply he captures the locale and personalities in such lovingly styled sentences. His prose reaches a level of emotion I’ve only rarely encountered. A wonderfu review by fellow writer Rick Bass states:

The American ecologist Aldo Leopold wrote that to possess an awareness  of the environment is to understand that we live in a world of wounds,  but it is just as true that a novelist as astute and compassionate as  Charles Frazier knows this same truth, not just up at the surface, in  the natural processes of rot and rebirth, but within the vertical  component of damage in the human psyche. At times the depth of this  knowledge appears to be so profound as to pass through pain or judgment, and exists as pure observation, sharp and specific.

It is that melancholy sense of the human mind that will continually draw me back to Frazier’s work to savor what only he can do so well. 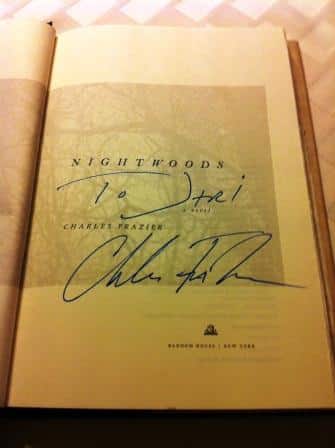 I stood in line to get my book signed and made sure to let him know I was from Idaho and that my only real previous knowledge of North Carolina had come from his books (I guess Nicolas Sparks books count too, but not so much…) He instantly asked if I had heard of an Idaho writer/musician by the name of Josh Ritter. I couldn’t say I had, but when I picked up a local entertainment paper soon after, Isaw the name Josh Ritter on a list of performers coming to the Charlotte area. How crazy is that? Or is it more impressive that Frazier could conjure the name of an Idaho writer before the Idahoan could herself?

What public readings of authors have you attended?