#LitChat: In Praise of the Book Hangover

Misery hurts so good. Or at least it does in the case of a book hangover. We’ve all been there more than once. What are the symptoms? Mainly, it’s that hollow feeling we get inside that makes us not feel ready to start a new book. It’s almost as if the recently finished book has crawled inside our brains and taken up residence. The only real cure from a book hangover is to chase the next reading high by reading yet another book. And so it goes… 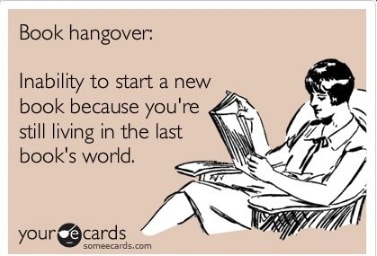 In the name of all things literary, I want to share a handful of books that reside in my very bones. I hope you will do the same. During my time as a submissions editor, it became clear just how many good stories there are in the world, and yet only a rare few have ability to linger with the reader long afterward.  Maybe it all comes down to how readily we identify with the story. I know for certain, reading Hamlet gave me a book hangover from which I will never recover. Ever.

The Vampire Lestat: Vampires with real bite occupied my adolescence. There was something so lush about the settings and something so sensual about the characters. Lestat is the ultimate vampire. A brat prince. A rock star. He did whatever the hell he wanted and got away with it. The book scared the bejusus out of me, yet I read the Vampire Chronicle series over and over. Every time I turned off the light in my bedroom, visions of floating vampires just outside my window danced in my head.

The Color Purple: It’s safe to say Celie’s journey from voiceless to voiced self-actualized member of the human race struck a chord with me and opened my eyes to women’s issues and spirituality in general. Shug taught Celie how to be comfortable in her own skin, and I learned right along with them. In college, the book’s impact on me culminated with a piece of literary criticism: The God Within: Structure and Spirituality in The Color Purple. It’s now one of my most viewed posts on this blog.

The Grapes of Wrath: If Lestat shaped my sexuality, and Celie helped me find my voice, then I guess the plight of the Joad family taught me about how so many hard-working people just can’t seem to get ahead while corporations grow on the backs of struggling men. My worldview began to widen in scope thanks to Steinbeck. My consciousness deepened. The controversial ending, which I wrote about in Bonding with the Joads: Attaining Closure in The Grapes of Wrath, was just right.

Their Eyes Were Watching God: And then there is Janie. Where would I be without Janie? She had to learn about life and love the hard way, which is the only way to really learn anything at all. Struggle makes us real. Without struggle we cannot appreciate the good things. Often, it’s profound loss that leads the way. I related to this book twenty years ago, and even more now after a gut-wrenching divorce. Life is struggle and suffering. In other words, impermanent and changeable. Fear not. Just be.

What was the last or most memorable book hangover you experienced? What about the story gripped you so?

The image and videos used in this post are for promotional purposes only and comply with fair use guidelines.