A.K. Andrew’s guest post today addresses Margaret Atwood’s mixing of genre in The Blind Assassin. A. K. and I clearly share a similar taste in books, and now I’m convinced I need to read more books by Atwood!  My guest post on her blog is titled Reading Fever. And now I turn my blog over to her…

First let me thank Jeri for allowing me to be a guest on her blog. I’m honored to be here and thrilled to be included in the ranks of her excellent posts.

The Blind Assassin: A Lesson in Thinking Beyond the Expected

Most novels can be categorized in one genre e.g. mystery, thriller, literary fiction, romance, crime etc. But what if the novel does not neatly fit into pre-ordained boxes? Mixing genres in one novel is not for the feint-hearted. How successful they are depends on the skill of the author. It’s perhaps only someone as seasoned an author as Margaret Atwood who can succeed.

That said, as a writer I’ve been influenced by her work in trying to span the gaps between different genres, trying to think beyond the expected. In my current work in progress, Under The Bed, I meld literary fiction, and 20th century historical fiction, with a touch of mystery. There are also two distinct story lines in two different time frames. Atwood’s work is not something I can match, but why not try and learn from the best? Let’s look here at where my inspiration comes from. 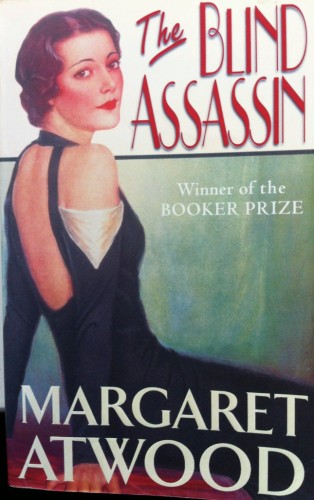 The first story is about Iris, the 83-year-old narrator, writing her memoirs, trying not to be erased. Her doctor dismisses her as, “an ineffectual and therefore blameless old biddy.” Through much of the book she appears inept, but turns out to be a wolf in sheep’s clothing. Iris is revealing the truth, in the hopes of reconciliation with her estranged granddaughter.

The second, and main story focuses on the early life of Iris and her younger sister Laura. We’re told in the first sentence of the novel Laura killed her self by driving off a bridge in 1945, when Laura is in her mid twenties. Laura is arguably the main protagonist. Their father was a wealthy industrialist but by the time the depression hits, the business is failing. At eighteen, Iris is co-coerced by her father to marry a rival industrialist, a man more than twice her age, in order to save both her father’s failing business and to secure a future for Laura. (The theme of women’s subjugation and their attempts to escape it is a common theme in Margaret Atwood’s books, The Handmaid’s Tale being the most striking example.)

The third tale within the book takes the form of excerpts from a novel – called The Blind Assassin – supposedly penned by Laura. When it’s published posthumously, it gives Laura iconic status. This thriller/romance is a tale about a clandestine affair between an unnamed man and woman. The sexual nature of the book, and speculation of who the two people really were, has devastating consequences.

The fourth tale is a pulp sci-fi story that the male lover in The Blind Assassin is serializing in penny magazines. After their lovemaking, the man tells the story and the couple, often lying in a seedy hotel room, escape into the imagined world of the planet Zycron, where the city of Sakiel-Norn teeters on the brink of disaster. What is remarkable is that this is a complete shift of genre. Atwood is no stranger to science fiction, but for the intellectual lovers in the fictitious The Blind Assassin it is a dalliance in something “non-literary.”

Undoubtedly Atwood’s novel as a whole is considered literary fiction, but she employs techniques that are more fitting of a thriller. She employs a slow reveal that is an essential part that feeds the suspense of The Blind Assassin. As well she uses the technique of a thriller by switching from different scenes as well as time frames, keeping us on the edge of our seat. But more often than not what causes the suspense is the sub-text: what is not said.

The affair in the The Blind Assassin is a particular source of intrigue, in part because the characters are unnamed. Atwood deliberately confuses us by telling us that Laura penned the book, so when she starts dropping hints that Iris may be the woman in the affair we wonder how Laura knew. And of course the hints are very subtle.

There are a myriad of other sub-plots I won’t go into, but I can’t talk about a Margaret Atwood novel without referring to her wonderful descriptive prose, and use of metaphor and simile. Here are a couple of examples:

On the night before her arranged marriage, we see Iris’s disgust as she puts some cream on her hands: “This treatment was supposed to make your hands all white and soft –the texture of uncooked bacon fat.”

The sisters meet for the first time after their father has died. “She (Laura) … threw her arms around me and clutched onto me as if she were drowning. No tears, just that spine-cracking embrace.”

We only learn the name of the narrator a third of the way through the novel. This is quintessential in the disclosure of information throughout the entire novel – slow and deliberate. It’s a significant chapter and I’ll close with a short passage from the same chapter. There is a mere hint of something happening – no names, no specifics, just an undertow of tension for the reader. Atwood is not the sparsest of writers, but her language is always relevant. She crosses genre so expertly we hardly notice what she has done.

Was that the beginning, that evening – on the dock at Avilion, with the fireworks dazzling the sky? It’s hard to know. Beginnings are sudden, but also insidious. They creep up on you sideways, they keep to the shadows, they lurk unrecognized. Then later they spring.

Do you have favorite novels that cross genres? What kinds of fiction do you enjoy?

You can connect with A.K. Andrew on her blog. Don’t forget to chime in on my Reading Fever guest post on A. K.’s blog. 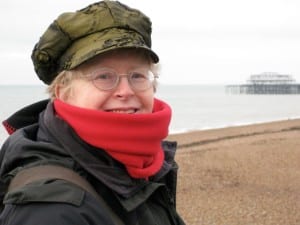 Biography: A.K. Andrew was born in England. In the mid-late seventies, she spent five years in London where she was involved in the alternative housing movement, and became a Community Arts photographer and screen-printer.

After travelling in North Africa and Europe, she moved to California, making San Francisco her home for over twenty years. In San Francisco’s atmosphere of breaking boundaries and creative expression, A.K. became a painter, and ultimately a writer. In June 2010, she completed a Creative Writing Certificate at the University of Sussex.

An excerpt from her first novel, Radio Echo, received a notable mention in the subsequent anthology Voices from the Shore. In December 2010 Radio Echo was shortlisted for the Sussex Writer’s Award. The novel is the story of a young Italian Jewish woman in wartime Italy. Kathy plans to self-publish Radio Echo in 2014.

Her current novel, in its final draft stage, is Under The Bed. It juxtaposes the story of a Central Park west matron and an East Village artist against the backdrop of the 1950’s McCarthy era and the late sixties Vietnam Conflict.