Two of my proofreading projects have just been published. This proofreading sample shows how Word’s Track Changes feature is used to correct errors in spelling, grammar, and punctuation. There is no restructuring or re-writing of sentences for clarity. However, proofreading entails much more than merely running the document through spell check.

I’m often asked about various grammar rules. Time and again, I point the curious toward The Chicago Manual of Style, 16th Edition

(CMOS) and  Merriam-Webster’s Online Dictionary. These sources set the professional standard for usage rules. As such, they are also an editor’s best friend. Any writer would be well-served to familiarize themselves with these primary authoritative sources.

The screenshot images for this proofreading sample have been taken from T. B. Markinson’s novel Confessions from a Coffee Shop. The blurb for the book appears below. The other recent proofread I completed was of Denise Baer’s novel Fogged-Up Fairy Tale. Many of you may recall Denise’s guest post on the power of words or the reviews of her two books or author interview that have appeared on this blog.

Cori Tisdale was on top of the world. A basketball star at Harvard and a promising author with a lucrative book deal. A few years later, Cori’s life is falling apart. Her beautiful girlfriend, Kat Finn, has a shopping addiction. To make ends meet, Cori takes a part-time job at a coffee shop. Just when Cori thinks her life can’t get any worse, an old crush appears out of the blue. Cori’s friendship with Samantha Clarke pushes Cori further into a dangerous abyss when Sam reveals two secrets to Cori and asks her not to tell a soul, including Kat. Will this be the end of Cori’s and Kat’s relationship?

Please Note: If the images appear too small for your liking, press Ctrl + or Ctrl – to zoom in and out on your PC keyboard. If using a MAC, follow these steps.  Clicking on each image will also open it in a new window.

My turn-around time on proofreading a manuscript of 320 pages or less is typically two weeks. As with any copy editing or critique projects that I take on, I request all Word documents be submitted in 12 point Times New Roman Font, double-spaced with indented paragraph and one-inch margins. Before turning on Word’s tracking feature, I search for all instances of two spaces after punctuation marks and replace those with just one space. I divide the number of pages by the number of days set aside for the project. That way I avoid overly long sessions. I read each set of pages twice, once in the morning and again in the afternoon. At the end of the entire process, I make one more pass to catch any remaining mistakes.

Even though this proofread fell into the light category, its Achilles’ Heel revealed itself early on. Above is one of the few comments I made on the manuscript, but I also emailed the author to clarify standard convention calls for keeping the entire narrative in the simple past except where the use of the past perfect tense is necessary.

Notice the red circle above. The screen shot shows the document in All Markup mode, but a simple click to Simple Markup mode allows for easy toggling between both modes. This allows the opportunity to get a better sense of the changes by hiding the corrections indicated in red. The screenshot below shows how same paragraph looks when viewed in Simple Markup mode. The vertical red line down the side indicates a change has been made in each of those lines.

Once finished, I save the project as two files: one with all of the changes visible for acceptance or rejection and in another CLEAN file where I’ve accepted all of the corrections, deleted the comments, and turned off the Track Changes feature. Some authors will comb through line by line in the tracked document, while others are fine with accepting most (if not all) of the corrections.

If for some reason the author doesn’t want to toggle back and forth between All Markup and Simple Markup modes, the two files can be opened and adjusted to display side by side on the screen as shown in the screenshot below. In order to get each document to only fill half of the screen, minimize the window and then drag it to the corner so it locks in place. 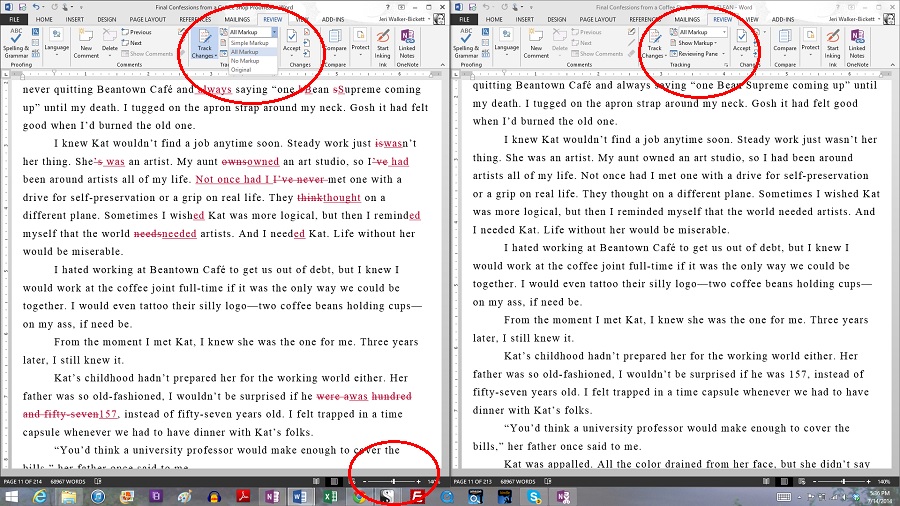 The majority of the changes in the above image still mostly fall in correcting shifts in verb tense. However, I did capitalize Bean Supreme because it  is functioning as a proper noun. Also, CMOS calls for spelling out whole numbers zero through one hundred. Even though I know much of the manual like the back of my hand, I still take the time to look up any issue I am not one hundred percent sure about.

What writing manuals or websites do you rely on when it comes to finding answers to your proofreading questions? Are you a grammar geek?

Permission must be granted by JeriWB to use the images in this post.