The first half of 2017 hasn’t turned up any literary gems I’ve fallen in love with, but nonetheless I managed to read a few books I’ve enjoyed. As for the titles like Hillbilly Elegy, it’s still possible to take away important points even though the bestselling memoir stuck me as lackluster. Most of my reading these days occurs via Audible audiobooks while walking my dog. I combed through my Kindle archive the other day though and am intent on tackling some ebooks during the summer months. 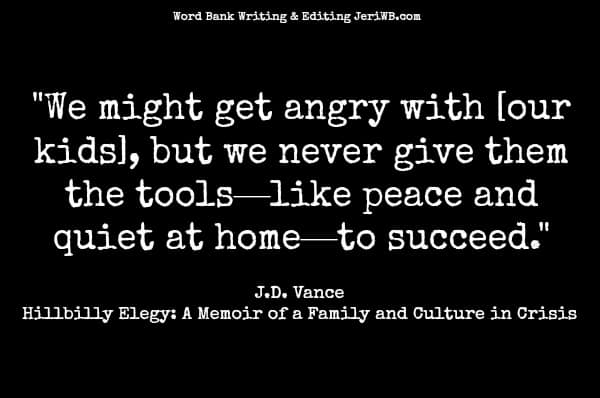 *Each cover is an Amazon affiliate link. If you click and purchase, I get a percentage.

Just like I did in December, I’m back six months later with another post to highlight recent reads. The short reviews below are the type I post to Amazon and Goodreads. Back in the day, this blog focused on lengthy critical book reviews such as scathing one of Fifty Shades of Grey. As scheduling permits, I will still be posting literary criticism pieces like How to Read a Personal Essay.

The bestseller status of this memoir piqued my interest, but ultimately the book falls flat. The author delivers somewhat of a sociological analysis of hillbilly culture, though it’s decidedly not very sophisticated in its delivery. At times, it read like a high school research report with citations tacked on in order to deliver breadth instead of depth. Plus, the prose borders on downright clunky a good deal of the time. The most interesting parts involve the anecdotes about Vance’s grandparents, mother, and series of “uncles.”

A better story would have delved into all the particulars of how he managed to come through it all as a graduate of Yale Law School. Such contrasts are where the true story gold lies and where the true implications of research can be mined if questions are to be answered. In any case, the book does solidify my impressions that the poverty I grew up surrounded by in a small silver mining town in northern Idaho bears a lot of uncomfortable similarities to Vance’s neck of the woods. This book can hopefully lead the way to a gradual deepening of the conversation it’s started.

Ella has cancer and John has Alzheimer’s. Together they make a complete person, mostly. Rather than waste away in a nursing home, Ella wants to go on one last road trip… to Disneyland. Everyone deserves to go out with dignity. I realized lately I tend to gravitate towards books that feature senior citizens as main characters. I’m not sure what to make of that, but this book is no exception. On the surface, I should not like this book. Almost the entire story is interior monologue. But an eighty-year-old woman certainly has a lot to say. I admire this book on many levels.

Where do songs come from? Where does any art come from, for that matter? What we create is the culmination of a myriad of influences. In Springsteen’s case, some of those influences include a mentally ill father, a devoted mother, a Catholic background of perpetual guilt, and the artist’s own struggle with depression. Songs about the common man can transcend the everyday, and their creator often found himself becoming a spokesperson for various causes. His life story is a study in how an artist comes to be, the hard work, the mistakes made, the steadfast grit necessary to hone one’s craft and understand one’s limitations. He notes a few times he was the dictator of the band, but yet still welcomed creative input to a degree. Various anecdotes such as his first “real” guitar actually turning out to be six-string bass are priceless.

Even though I’ve taught English, my background in mythology was always just enough to squeak by when teaching The Odyssey. All that’s started to change by meeting someone more well-versed in mythology than I. He also has a son who is going to end up being one of those students in class who can school the English teacher when it comes to gods and goddesses. In any case, I’m a new fan to Gaiman’s work and found this collection a worthwhile basis for developing a deeper appreciation for Norse lore as well as his other books like American Gods and Anansi Boys. The author clearly knows his subject and brings each story to life with vivid reinterpretations and deft prose.

The primary audience for this book is someone who hasn’t been married yet and probably wants kids. I am not that person. In any case, the book does go about offering advice on how to form a solid and lasting partnership. Despite the in-your-face title, the level of bluntness and humor struck me as veering toward the milder side. I skipped all of the chapter quizzes, but some readers will inevitably enjoy such things. To me, it’s a no-brainer to look for someone who will make a good partner, but we all know feelings can and do get in the way of taking a business-like stance to finding a significant. As someone who thought she’d been a careful spouse shopper only to have him literally disappear, I’m more inclined to heed books that give advice on how to bridge inevitable communication gaps rather than treat relationships like a business.

All of the books I read this year can be viewed on my Goodreads Reading Challenge. While you there, make sure to add me as a friend if we haven’t already connected.

#AmReading: What recent reads have you loved or been underwhelmed by? #BookReviews
Powered By the Tweet This Plugin

I’d like to thank Marie Bailey for featuring my GoFundMe breast cancer campaign in the post Living in the Moment and Beyond.