The Swedish novel A Man Called Ove turned out to be my favorite book of 2016. I only finished it yesterday, so I did indeed save the best for last. When it came to this year’s goal of finding more reading time, I got creative to say the least. In order to reach my goal of fifty books, I included works published by clients as well as a steady selection of audiobooks. That aside, my list of books actually “read” comes in closer to 25. In any case, it’s been a great year for many reasons. I’m going to take a couple off weeks off, but will be back come January. Happy holidays and many continued thanks for all your support. 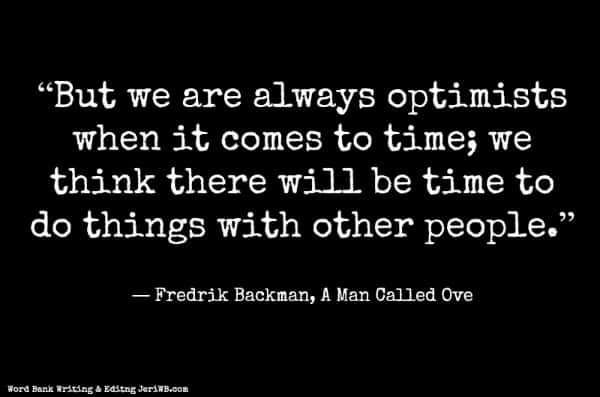 As I did with June’s post, I’m highlighting five memorable books from the last six months of reading. The reviews are of the casual variety I post to Amazon and Goodreads, though some of you will recall the in-depth critical book reviews I used to post on books such as Jeffrey Eugenides’ The Virgin Suicides. From time to time, I am still posting literary criticism pieces such as the one I wrote on John’s Steinbeck’s The Grapes of Wrath.

The books that touch us the most tend to be the ones that find us at the right time in our lives. I connected with the novel’s themes of love, community, and friendship on many levels. Ove’s wife has died, so he too wants to do the same. Yet, offing one’s self proves to be quite the challenge. A series of events bring new people into Ove’s life as well as a mangy cat. As this closed-off man starts to give more of himself to the people around him, his backstory is revealed. The story is comical, sentimental, and the ending as it should be given Ove’s wish that drives the plot. My main pet peeve would be Ove’s age. At 59, he comes across as nearly 20 years older. This is a solid story for those who enjoy slice-of-life literature.

This is the first book by Neil Gaiman I’ve given a go. I am not normally a fan of fantasy stories, but found this work to my liking. It’s clear Gaiman is a master writer capable of spinning a layered plot. His characters jump off the page and his imagery pulls a reader into every scene with his writings cinematic style. The full-cast audiobook did not disappoint and provided a great way to pass time on a long road trip. Perhaps fewer characters could have helped me connect more to the book, but all-in-all it’s an epic story worth a read.

The mystery and suspense elements in Hawkins’ book work rather well and didn’t feel overly predictable. The ending did come off as a little too obvious, but overall, the pacing kept me reading. All three female characters leave a lot to be desired, as does dear old Tom. And yet, it makes sense that such passive women would be the ones drawn to Tom time and again. What I struggled with the most is how all three of the narrator’s issues had to revolve around children. In this day and age, it’s refreshing when a female character doesn’t have to be defined by the role kids have played in her life.

Fight Club is funny, raunchy, and clever. At it’s core, the novel serves as a commentary for the empty, consumer-driven lives we lead. The use of first and second person allows a depth to the narration as the reader gets to know Tyler and the unnamed narrator. It’s perhaps a book that calls out more to younger readers, but it’s a remarkable accomplishment nonetheless.

As with every other celebrity memoir I read, this one was a mixed bag of good and not-so-good writing. The book’s strongest point, as with her comedy, is how honest Schumer is about her life. She goes straight for the uncomfortable and comments on rather traumatic events with wit and humor, only she does so with far less skill than when she’s on stage. In any case, the attention she brings to sexual assault is worthwhile. She is brave to share so much about herself as a way to disarm critics.

All of the books I read this year can be viewed on my Goodreads Reading Challenge. While you there, make sure to add me as a friend if we haven’t already connected.

Have you read A Man Called Ove? What recent reads would you recommend and why?

#AmReading: What books from the past year rocked your world? #BookReviews
Powered By the Tweet This Plugin