Even though I saw the movie version of Jeffrey Eugenides’ literary fiction novel years ago, I never got around to reading it. The Virgin Suicides is the only book that has also been made into a movie that I kept on this year’s reading list. With so many titles to read, I figure life is too short to linger on ones already made into decent movies. A bit harsh perhaps, but the point is The Virgin Suicides made that cut due to its experimental use of narrator. 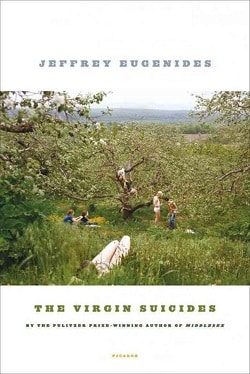 During my recent internship with a literary journal, the title of Eugenides’ novel got tossed around as a prime example of an experimental narrator. The title does indeed give everything away, and the opening lines set the dire scene:

On the morning the last Lisbon daughter took her turn at suicide–it was Mary this time, and sleeping pills, like Therese–the two paramedics arrived at the house knowing exactly where the knife drawer was, and the gas oven, and the beam in the basement from which it was possible to tie a rope.

The appeal of a macabre story like The Virgin Suicides lies in the “we” telling the story. Years after the parents have moved away and their neglected house sold, the now-grown neighborhood boys gather to try to piece together what may have caused the five teenage daughters of a high school science teacher and a strident Catholic mother to end their lives.

The anonymous first-person plural narrator captures the perspective of the teenage boys who become infatuated by the sheltered Lisbon girls. This technique creates a distance between the family’s emotional turmoil and the reader’s tendency to judge. The author’s choice to put such a set of filters in place allows a more authentic atmosphere to develop around the way the deaths of the Lisbon girls leave their mark on the 1970s community. This allows the author to highlight how outsiders can never really know the details of such situations, but obsess over it all the same.

In essence, The Virgin Suicides is a coming of age novel, but it also functions as an exploration of what it means to live. The reader continually wonders about events right along with the boys. Who’s to blame, if anyone? After the youngest daughter Cecelia’s failed attempt to slash her wrists, the girls later hold a chaperoned party where the boys are invited. On that night, Celia succeeds by throwing herself out the window and impaling herself on the iron fence.

The decline of the family sets in slowly and surely. Lux Lisbon, the prettiest of the daughters, starts seeing one of the most sought after boys at their school. It’s finally agreed that she can go to a dance as long as the three remaining sisters have dates as well. Lux ends up not making curfew. The mother then reacts by pulling the girls out of school, and their father is eventually forced to take a leave of absence. Ever-watchful, the boys start to observe Lux’s antics:

The Virgin Suicides is just one of those books that is sad and beautiful at the same time. Despite the depressing subject matter, it’s still possible for the reader to come away with a sense of wonder regarding how we all react to the many situations life throws our way. The language carries its own haunting beauty and poetic rhythm as well.

It didn’t matter in the end how old they had been, or that they were girls, but only that we had loved them, and that they hadn’t heard us calling, still do not hear us, up here in the tree-house, with our thinning hair and soft bellies, calling them out of those rooms where they went to be alone for all time, alone in suicide, which is deeper than death, and where we will never find the pieces to put them back together

What was your reaction to the book or the movie? Why is it that we are often drawn to seemingly sad stories that make a statement about how we live life?