Crimes comes to small town California in the form of grisly murders committed by a serial killer. The calling card left behind for investigators comes in the form of an eerie wizard painting done in a shade of dark blue at each murder scene. The victims fall… first, second, third, fourth. One by one, clues lead to the inevitable catching of a killer. 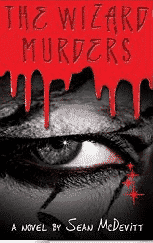 Detective Andy Pitt unravels the mystery of The Wizard Murders with the help of his partner Clarence and a secretary named Denise. One of the most satisfying aspects of the novel comes in the form of the ineptness that characters often show in dealing with the crime scenes. After all, Beaumont in 1981 is a tiny town and murders are far and few between.

The bubble-gum chewing secretary’s mad skills in astronomy come in quite handy and also work to create a multi-faceted character. On the other hand some of the characterizations felt a bit thin. The reader finishes the novel still without a complete sense of what truly makes Detective Pitt tick. Large passages of this main character’s thoughts are italicized, which makes the reader wonder if first-person narration would be a better fit.

Sean McDevitt’s style shows clear sentence structures, though some of the vocabulary choices feel inspired by a thesaurus. Portions of the dialogue see characters dropping the “ing” endings from words and distracting dashes are used throughout. The use of present tense may throw some readers, but fits when spinning a compelling crime story.

The clues that Pitt must follow click nicely, although an instance early on with some sheets at a Laundromat doesn’t seem laudable. Some details like how his boss collects lots of Coca-Cola memorabilia go nowhere, and other details like the annoying ceiling fan are carefully layered until their importance to the plot become clear.

Sean McDevitt’s first novel is a promising effort and it will be interesting to see what type of story he will spin next.

What do you look for in a good mystery?


A complimentary copy was provided by the author in exchange for this review.