#BookReview: The Persecution of Mildred Dunlap by Paulette Mahurin

A book touted as a women’s Brokeback Mountain certainly knows it is fulfilling an overlooked niche in the world of literature. With great excitement, I began reading Paulette Mahurin’s historical fiction novel The Persecution of Mildred Dunlap, while keeping in mind Annie Proulx’s story of the lifelong love between Wyoming cowboys sets a demanding standard.

The premise of Mahurin’s story involves two women who are living together as lovers in small town Neveda circa 1895. Mildred, the protagonist, is portrayed as a rather ugly, but wealthy woman, who generously helps others while keeping mostly to herself. Her cousin Edra, who was brutally raped at nine years of age, gives her love willingly to the cousin she trusts and grew up with. 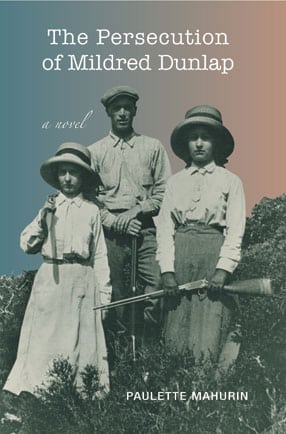 Oscar Wilde’s trial for “gross indecency” serves as Mildred Dunlap’s inciting incident. Each chapter begins with an appropriate quote from Wilde. Throughout the book, the town’s citizen’s gossip and react to the news of Wilde reported in the newspapers. This book definitely makes me want to learn more about Wilde’s trial, but I also found myself wondering if Wilde’s case really would be the shot heard all the way around the world in small town Nevada?

Once the town gossip starts to fly, Mildred starts to concoct a plan to get Charley, a recent widower to show interest in her, so as to deflect attention away from the living situation between her and Edra. Josie serves as a main source for gossip that serves to persecute Mildred. The reader is told this too many times, and not shown the details. Or perhaps it is just the action hinted at in the title did not match the connotations I associate with persecution.

As a reader, issues began to arise for me early on when the narrative viewpoint began to switch between characters. As a result, I never felt like I really got to know the characters well enough to form an attachment to their lives since the story flitted from one point of view to the next. Another issue presented itself in how the story feels so modern. At most times, aside from a few setting details, the scenes and dialogue read like it could be set in the present day.

A character named Gus serves at the voice of reason, but for 1895, the sentiments he expressed felt very modern-day. At times, he shared his reasoning on tolerance with other characters, but it comes across like the author giving the reader a lesson how humanity ought to treat each other with understanding and respect.

Overall, I liked this book, but feel it could be molded into so much more. It’s fascinating that this story was inspired from an old time photo, which is also featured on the book’s cover. Mahurin’s book does serve to enlighten readers, and she certainly practices what she preaches as all proceeds from the book go to help animal rescue.

You can connect with Paulette via her blog.