#BookReview: The Death of Wendell Mackey by C. T. Westing

Wendell Mackey is no longer a man, but what is he? He is in the process of a transformation, but what exactly is he becoming? Not even Wendell knows for sure. The Death of Wendell Mackey begins three days into the main character’s escape from an institution where he had been held against his will in order to become a test subject for experiments of a medical nature. The author immediately whisks the reader into Wendell’s mindset and the suspense of the story begins to build.

The strongest aspect of this engrossing story hinges upon C. T. Westing’s ability to capture descriptive detail. The scenes are rendered in a cinematic style. The author leaves no stone unturned as he painstakingly draws the reader in Wendell’s dark and confusing world. Plus, the beautiful cover art complements the plot well.

The reader gets a glimpse into Wendell’s past as he hides out in his mother’s old apartment. Flashbacks reveal how he was tricked into undergoing the experiments that are now causing his skin to peel off along with his toes and teeth. The fascinating surface story invites the reader to dig into deeper implications such as the nature of man and the role of science in modern life.

The novel’s structure may strike some readers as difficult to read, not because of the writing (which is very strong and engaging) but because of the overly long chapters. Even with the streamlined nature of eBooks, readers often still find themselves hoping for manageable chapter breaks. Another issue in the novel that broke the flow of the narrative centers on paragraphs that often run the length of one, and sometimes nearly two full screens on an iPad. 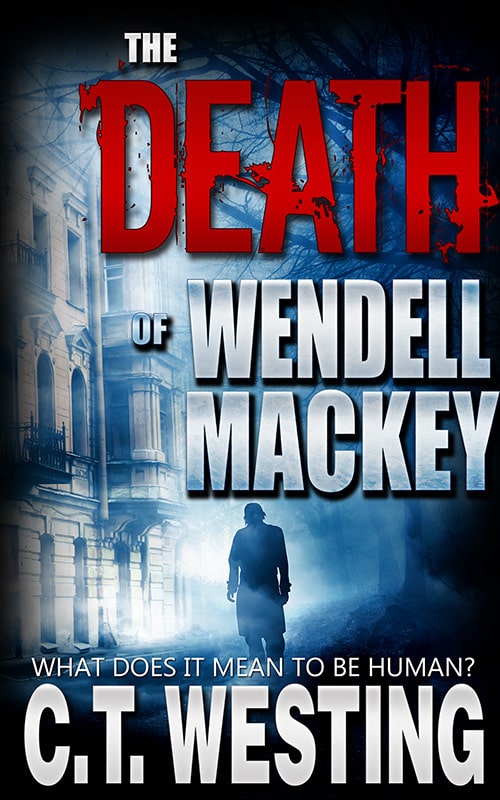 The ending might possibly leave some readers wanting more, or it could strike other readers as the perfect fit. The Death of Wendell Mackey is definitely good because every reader will definitely find their own backgrounds and beliefs influencing how they interpret the story.

All in all, Wendell Mackey is a strongly drawn character the reader will feel connected to as they get to know him and all that has happened in his life. Scenes where he recalls details about his less than admirable mother certainly shed light on his character. The author keeps the narrative moving along, but it does not do the book justice to give too much of the plot away. Just know the story unfolds in a mesmerizing manner and Wendell’s mysterious transformation makes the story hard to put down.

You can connect with C. T. Westing via GoodReads.

Are you typically drawn to stories of this type?