By far, Denise Baer’s Net Switch is the best self-published book I have read. I stayed up late and got up early to finish. Loss of sleep is one of the best compliments for readability that a book can ever receive. The obscure nature of reality fills this psychological suspense novel with multiple mental twists and turns and invites the reader to sit shot-gun with one very tortured soul.

In order to alleviate her suffering, the narrator finds herself in more than one risky situation. Sydney finds herself looking for attention in online chat rooms. When she identifies herself as “Newbie,” a gentleman aptly named Arcane moves in to claim his prey. Sydney makes every mistake that can be made when it comes to meeting people online. It comes as no surprise that the relationship that springs from such secrecy results in pain and frustration for Sydney. 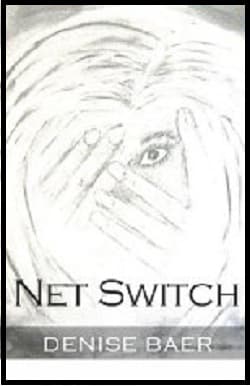 The book is written as a series of journal entries, but from the viewpoints of two narrators. Caitlyn’s entries (fewer and farther in between) seem a bit jarring and unrelated at first, but given how the setting of Net Switch locates the narrator in a mental institution on the first page, the two seemingly disconnected narrators soon morph into two sides of a sad tale.

The narrative is written in a close first-person point of view. Italics are often used to show Sydney carrying on an inner-monologue. The author impressively sustains the almost suffocating perspective throughout the novel, which is no small writing feat. Indeed, the limitations of the narrative voice provide the novel’s utterly engrossing appeal.

The connection between the two voices shown in the journal entries could have perhaps been bridged a bit better with an outside transition between the two, such as another character shown reading the entries to help provide more context. Another small quibble would be in the sexually gratuitous videos found on YouTube and the seemingly inept police officers that appear in the story. Yet, considering the fragile and skewed mindset of both narrators, the reader starts to question their own perceptions of the text.

Sydney then moves to Seattle for a fresh start, but she really just begins slowly unraveling all over again. The reader may question how she affords such a move, but that’s all in the fun of reading this book. Indeed, the reader will question almost everything by the end.

The sex and language flow naturally as part of the story, and overly graphic scenes are not dwelled upon, but could potentially not be to some readers’ taste. However, great literature seeks to capture all walks of life, and Net Switch does just that.

You can connect with Denise Baer via her blog.

Are you typically drawn to novels of psychological suspense?