Today’s post in my best books series of guest posts focuses on the impact the Harry Potter series had on the life of Sofia Wren, self-proclaimed writer, healer, and proud spirit. I’m also doubly pleased to introduce you to Sofia as she is one of my awesome critique partners.

Harry Potter changed my life. Hermione, too. In addition to giving witches everywhere a more positive name, both characters left an indelible mark on my heart as they kept me company as a teen.

I first met Harry Potter in grade nine, right before the release of Harry Potter and the Prisoner of Azkaban. It would come to be my favorite book of the series.

My mother died at a young age, and like Harry, I didn’t have any memories of her to console me during hard times. At the time of the third book’s release, my father was just about to marry my step-mother.

Things hadn’t gotten too bad yet, but I wasn’t supposed to be up past nine, which I knew was ridiculous for an eleven- year-old. Like Harry, my room didn’t have a lock. My heart lurched with fear every time She yanked the door open to catch me reading HP under the covers or fan fiction on my teal iMac.

My step-mother became more Dursley-like as the series progressed. Even after my bedtime moved to ten, she still regularly barged in to yell, criticize, and tell me to do more chores.

I cry deeply whenever I read about Harry meeting Sirius–the champion he never had before. Somehow my stepmother separated me from my father, who was the only local family I really had. He missed all the signs that I felt unloved, and over-criticized in my own home. 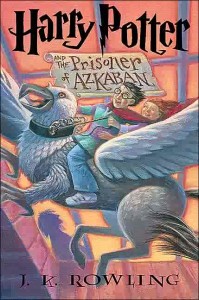 Like Harry, I was elated at the opportunity to spend time at my best friend’s house that summer. We read Harry Potter and other fantasy books on the beach. Like Harry was adopted by the Weasleys, I became adopted by the parents of several friends. But unlike Harry, I never got an invitation to Wizarding School!

I would have taken it in a heartbeat. At ten I was reading about Wicca and Witchcraft online, hoping to learn the secrets of how to take magic out of my fantasy books and into reality. My Dursley-esk stepmother didn’t like it–she warned me that everyone would judge me as evil or dark, that it would make my life harder.

Like Harry, I became the subject of rumors in my school. Being called “witch” in the hallway scared the living daylights out of me. Worse, it turned out the friends I thought I could trust, were the source of the stories! I laid low for years and read fantasy again instead of spiritual nonfiction. Books were my refuge, and I exalted in my slow transition from witch to harmless nerd. I really wished I could write a fantasy story, but fear of opening up held me back for years.

By the time I entered high school, Harry Potter had become a phenomenon. I sat in the front of the class, raising my hand often. When combined with my big wavy head of hair, I quickly gained the nickname “Hermione.” On one hand I felt proud to be a know-it-all, and I really wished I could go to Hogwarts. But I had just earned a clean slate, and I didn’t want the rumors to come back. Eventually, the nickname faded.

Hermione knows that school should be the focus of her life. Her teachers are her idols, because her parents really don’t understand her world. She gets good grades, does all the reading, and more. I was already doing all of these things, and one of my favorite parts of high school was getting a job at a local library. Yes, I did cozy up to my librarians.

Still, when I didn’t distract myself with my studies, I sometimes fell into a Harry-like depression. I dreamed about some magical place I could wish myself into, with beautiful flowers, a moat, and magic classes. Best of all–my dream world had no step-mothers.

Finally, I went college searching, the answer to all my dreams to escape my home. And I chose Bryn Mawr, often confused with Hogwarts from its castle-like appearance.

unlike Harry, I never got an invitation to Wizarding School! @SofiaWren
Powered By the Tweet This Plugin

Years later I returned to my spirituality and witchcraft. I had cut my hair, and so, strangely, had Emma Watson. I conquered the demons produced by my step-mother, fundamentalists who might put me on a banned book shelf, and my inner critic Voldemort. Alakazam–the power of self-love will do it every time.

And I started writing my own books about magic. Finally, I had come home to the magic world I always dreamed about. Once I broke through my fears, I even delved into personal experiences I had assumed I would always keep secret.

I learned a lesson that Harry did: by being raised to fear life, we grew courageous enough to be ourselves. That is truly the gift that we have to give to the world.

How has the Harry Potter phenomenon touched either your life or the life of someone you know?

You can connect with Sofia and her social media accounts via her website.

Sofia Wren is a rebellious writer, witch, magic teacher, and massage therapist. She is developing a program to end writer’s block with magical ceremonies, inspiring meditations and creative exercises, as well as finishing up her coming of age novel. She loves mermaids, fire, crystals, Tarot, singing, playing harp and curling up with a cat and a book.