Please say hello to R. P. Thead. This post marks my first interview of the new year. I’m certainly intrigued by the premise of his book, and I hope you will be too. To me, some the best books are always the ones that contain an element of what if…

Giveaway: Three randomly drawn commenters on today’s post will receive their choice of a print or eBook copy of his book.

The Sovereign Soil, a book of political fiction, is a rational look at what life might be like during a 21st Century Second Great Depression. Along the way, the characters and book deal with a lot of the issues that I think are most important to the young generation in the US (and the world) in an engaging, and non-partisan manner.

One of the main issues the characters deal with is agriculture—the increasing corporate control over our food supply and, our ability to feed ourselves. 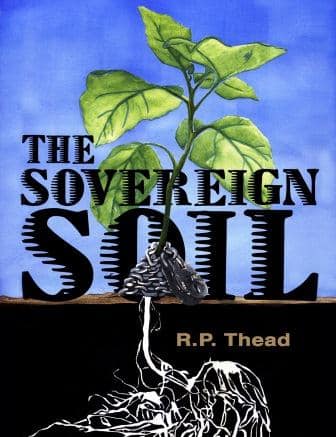 I started writing because I have always been a reader. This first book contains ideas I had experienced with “what if” moments with the year previous, and before. The big question is, “What if there was another Great Depression?” Which led to, “What would a Second Great Depression look like? How would it affect me, someone in his late-20s?”

While there are a number of books written about economic catastrophes of Depression-magnitude that take place sometime in the future, many of them come across as, or are, apocalyptic (or involve vampires). I wanted to take a rational look at what 21st century America would look like under similar economic conditions as the Great Depression. While a few things in the book are autobiographic (the cat’s name, the approximate age of the main characters, for example), the rest is fictional.

I am at a stage where I separate books into two categories: books that I have a great appreciation for as a consumer of popular culture and entertainment, and books that I respect. For the former, I find those books to be plot-driven, general fiction. Lighter stuff. Paperbacks, etc. Stuff I can drift in and out of with something on television in the background. For the latter, I consider those to be more serious, literary works of fiction that often require more than one reading (at least parts) to truly understand and appreciated.

As far as my favorite, I have to stay that it’s a toss-up between Robert Penn Warren’s All the King’s Men or Cormac McCarthy’s Blood Meridian. For the first book, it’s a great piece of American political literature that captures an era of American politics in a peculiar area of the country. For the McCarthy book, the punctuationless, unique prose shows a mastery of the written language—it definitely requires two reads. At least for me; it took me about the first third of the book to follow the dialogue without needing the re-read every other sentence.

I also read a lot of non-fiction, which is very apparent from my novel and writing on my website.

My blog is located at R. P. Thead.com [Site not currently active]. I do a number of things there. First, I post some less serious stuff, namely my Facebook Friday series where I scour President Obama’s Facebook update comments for ridiculous material, screenshot it, and comment on it. It’s gotten somewhat popular, and I get a lot of site traffic from it. Second, I do some research-heavy pieces on current events and certain public policy issues, namely on the student loan crisis and the effect of ramped-up federal government spending on Washington, DC as a city—the city outside of its political life. , although I know that is not a very effective marketing tool.

More than anything, I like to provide timely, relevant research with commentary and opinions that I think resonate with the millennial generation, and my readers.

Self-published. With the rise and rapid proliferation of social media, the way that consumers discover new books has changed. Not only do authors not need a publisher to tell them what a book is and what is not, the consumer does not need this filter, either. The marketing and promotion services that traditional publishers provide will become less relevant as the number of bookstores in the United States (and world) shrinks and eBooks continue to gain a larger share of the book market. Some positions in the book industry are no longer necessary, and the market will sort it all out. This especially means cutting out the middleman—literary agents. It is one thing for a publisher to pass on a book and tell you that they cannot make money off it. It is quite another for a middleman to tell you that they are not interested in “representing” a writer or a book project.

I formatted everything for my book, and recently did the same for a friend’s non-fiction publication.

As far as book covers, a friend of mine is a very talented, working artist in Washington, DC—Rachel Kerwin.

Don’t stop promoting or writing, and don’t get discouraged. It’s a very slow momentum for most—it has been for me. Anything that doesn’t work marketing or promoting-wise isn’t because you did it poorly or failed—it’s because it didn’t work. With so many people out there writing, self-publishing, and the deluge of content online, it is difficult to make yourself even a small peep amongst the ocean of people yelling.

Anyone interested in this should listen to everything the guys at the Self Publishing Podcast have to say (aside from their 15 minute comedy routine at the beginning of every episode). Those guys are great. They’re writers, but they’re only writers because they are talented promoters and marketers.

I am still figuring out what is working for me, since I am not writing fantasy. A lot of the success stories out there are fantasy or horror or vampires.

All self-taught, mostly by reading and re-reading The Elements of Style and the second half of Stephen King’s On Writing. The latter has become something of a self-published writer’s bible, and for good reason, although he obviously could not have foreseen it becoming that. Both of those books, plus a lifetime of reading, being read to, and having my grammar corrected did it for me.

I have graduate degrees in political science and international affairs. Not a single class in creative writing.

I’m pretty disciplined when it comes to writing. Once I have the project outlined, I more or less know where I am going, and how it will end up, and it becomes a matter of getting the words down on paper. Then it becomes a matter of rewriting most of those words, and getting rid of a lot of them. I’m lucky in that I have a lot of well-read friends and family who are willing to look at my work and give me feedback.

I do, however, suggest looking for a professional proofreader at some point in the finalization process with a large piece of writing. It’s almost impossible to catch everything.

I am putting out a novella/short story in December 2012. Something Christmas themed, set in Washington, DC. The writing is going well.

The next big project is a current nonfiction essay collection that I came up with, which addresses the big issues important to the Millennial Generation. Right now, it’s up to over a dozen contributors spread out over 5 continents writing about topics such as youth unemployment, the politics of food, international development, the student loan crisis, global health—just for starters. I am hoping to have it out in one of the first few months of 2013.

And of course I would like to start writing another novel as soon as I can.

Please check out my sites. I always like hearing from people.

You can connect with R. P. Thead via Twitter.

Is there anything else you would like to know about R. P. Thead?

Sovereign Soil can be purchased either electronically or in print from Amazon US and Amazon UK.