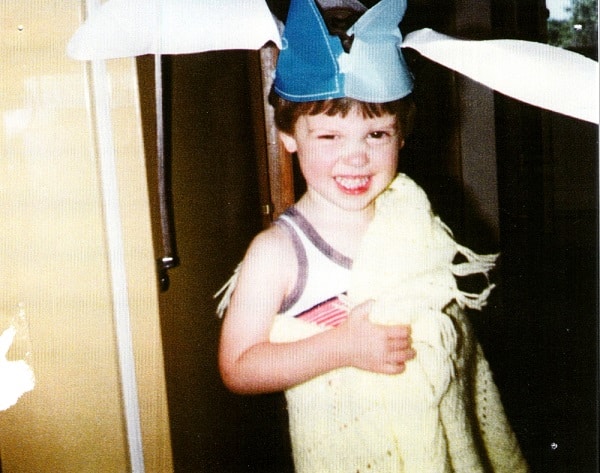 Chad Thomas Johnston feels his website should feel like Christmas to its visitors. Of all the authors I’ve interviewed so far, I must profess kid-like Christmas joy at having come across such a varied creative talent as Chad. Enjoy.

Giveway: One randomly drawn reader who comments on today’s post will receive a free electronic copy or signed print version of Chad’s novel! Rumor has it, the book will arrive in some out-of-this-world packaging…

Nightmarriage is a whimsical work of creative nonfiction—a memoir in essay form—that focuses on what I playfully describe as the “terrors of marriage and the perils of parenthood.” The book is autobiographical, and focuses on the first few years of my life as a husband and father.

The title is a portmanteau of “nightmare” and “marriage,” and serves as a preview of the kind of wordplay that appears throughout the book. I have always loved cartoons and tall tales, and people tell me my work reads a bit like both—I love this assessment! The blank page is a playground for me. 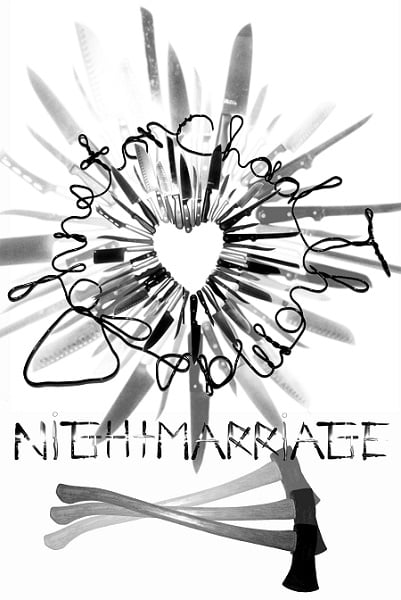 I’ve always written in some capacity—either as a pretentious poet in high school, an even more pretentious singer-songwriter in college, or an aspiring (and probably equally pretentious) essayist in adulthood.

On one level, I write for therapeutic purposes. I have Obsessive-Compulsive Disorder, and I find that writing feels a lot like assembling a puzzle, with each word serving as a piece that contributes to the final picture. Writing satisfies my need to immerse myself in an all-consuming project; it keeps my obsessive brain occupied. When I don’t write, my brain grinds away on far less enjoyable things, and often far more frightening things.

But writing is not purely therapeutic. I also write because I love writing. Or maybe I should say what I usually do about it: For me, writing is 20% rapture, 30% dutiful plodding, 30% fear and trembling, and 20% rewriting the same sentence over and over. But like a bug to a bug-zapper, I find myself drawn to writing, and it fries my brain and also electrifies it at the same time.

John MacGregor’s Henry Darger: In the Realms of the Unreal. It’s not really a novel because it’s not fiction, but I largely read and write nonfiction. In the case of this book, truth is stranger than fiction anyway.

It’s an in-depth analysis—a biography and a psychoanalytic exploration—of a reclusive janitor who, over the course of his life, wrote a 15,145-page fantasy novel and created over 300 paintings to accompany it, all without anyone knowing about it. He also wrote a 5,000 page autobiography that gradually evolves (devolves?) into a story about a tornado named Sweetie Pie.

His neighbors discovered his work when he was on his deathbed, and it has become a celebrated body of Outsider Art. The author studied Darger’s works for fifteen years, and he explores it for over 700 pages, and uses his expertise in psychology to evaluate of Darger, ultimately suggesting that he may have suffered from Asperger’s Syndrome. 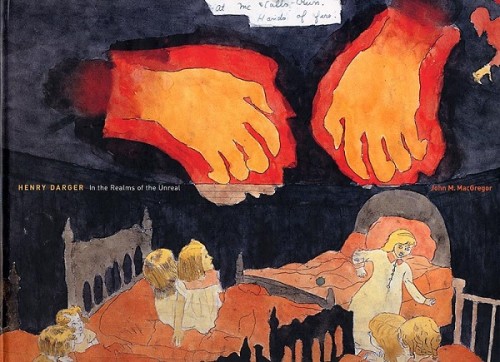 My website, chadthomasjohnston.com, is devoted to my creations, which include writing, visual art, and music. On the sidebar, there are widgets for my free Christmas album, Stalking Stuffers: Coal for the Stocking in Your Soul, and a 35-song compilation album (DJG Was Here) I assembled to coincide with a gallery event (2011’s “Quietly Contributing: The Poster Art of DJG Design”) for Kansas City-based artist Danny Joe Gibson, along with other downloadable goodies.

I mention the Christmas album because I feel like a website should kind of feel like Christmas morning, offering visitors lots of presents and surprises—lots of things a person can download and enjoy, basically. 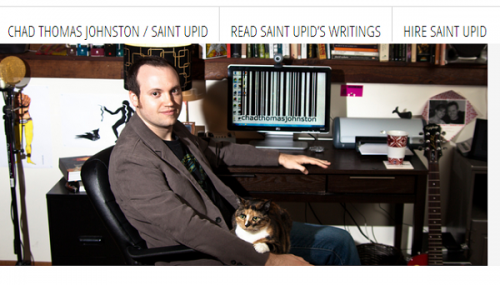 For Nightmarriage, I went with an upstart publisher that had international distribution. I considered self-publishing, but knew nothing about formatting e-books—especially with the varieties of e-readers available around the world. So I signed with eLectio Publishing, knowing they could put Nightmarriage out in over eighty different e-book formats internationally.

They also released my book in print despite the “e” at the beginning of their name—they are no longer solely an e-book publisher. I have found their staff very helpful, and I look forward to working with them more in the future on other projects.

I designed the cover for Nightmarriage myself, and can be contracted to design covers for other books, too. Other books I have designed covers for include Shawn Smucker’s Building a Life Out of Words and Dwain Smith’s Bullheaded. I always create my own typography—something I learned from Danny Joe Gibson. 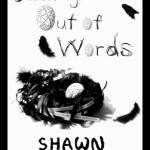 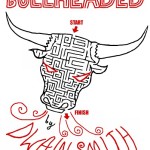 In a word: Twitter. A lot of people think it’s something celebrities use to tell the world what they’re eating for dinner, and that’s partially the case. But it’s also an amazing tool for networking. I use it obsessively to connect with other authors, potential readers, existing fans, the media, publishers, book bloggers, etc.

I met my former agent on Twitter. I’ve gotten manuscript requests from the media through tweeting. I met singer-songwriter Derek Webb, the founder of NoiseTrade.com, through Twitter, and later interviewed him in person. My current writing gig at IMAGE Journal’s excellent “Good Letters” literary blog came about through connections I made on Twitter. Both of my book cover design opportunities came about because of Twitter connections, too.

I know it’s not for everyone, but it suits my personality, the way my brain works, and the way I connect with people. So it can be used as a powerful tool. Your readers can follow me at @Saint_Upid on Twitter.

I have two degrees in communication studies, and I took some writing coursework along the way. But I’ve always written, so that’s always been happening in the background, apart from school or work.

Even in elementary school, I used to write little books. I’d bind them with cardboard and Christmas wrapping paper, and my classmates would check them out from my “library.” My mom says she knew writing would be a part of my professional future when I began doing that.

I follow Anne Lamott’s advice and write “shitty first drafts,” and let them be what they are.

Then, I take the advice of my friend Jennifer Luitwieler (author of Run with Me: An Accidental Runner and the Power of Poo), and I leave that first draft alone for a few days. Then I revisit it, and edit it two or three more times before I decide it’s done.

The editor for IMAGE Journal’s blog, Cathy Warner, is editing another book of mine (titled The Stained-Glass Kaleidoscope). When I find myself at the bottom of a very deep writing hole, she’s the one who lowers the rope and hoists me out.

My friend Jennifer Harris Dault, who edited most of Nightmarriage and spearheaded and edited 2012’s The Modern Magnificat: Women Responding to the Call of God, also serves as a sounding board when I need editorial guidance.

I’m always writing new essays for IMAGE Journal’s blog, and I’ll soon be editing The Stained-Glass Kaleidoscope. I may or may not publish it in one piece—I may break it up, as it’s fairly huge. I wrote it before Nightmarriage, and honestly, some of it may not be viable at all. We’ll see.

I’ve also had a collaborative work of fiction in the pipeline for awhile now, but my coauthor and I have not touched it in quite some time. We’ll see if we can resuscitate it. It’s been in deep-space cryo-sleep for a few years now.

Yes—they should check out IMAGE Journal’s “Good Letters” blog. I am humbled to share that particular writing stage with so many notable people. Bradford Winters, who wrote for HBO’s Oz, and who writes for FX’s The Americans, is there. Caroline Langston, a contributor for NPR’s All Things Considered, writes there. Poet Peggy Rosenthal does too, and she is just the sweetest lady. Editor-in-Chief Gregory Wolfe wrote a biography of Malcolm Muggeridge that prompted Christopher Hitchens to reassess his own perceptions of the book’s subject—no small feat!

Reading the essays of all the other contributors always challenges me to elevate my own writing. Writers need people like that in their lives to keep them sharp, and to keep them from becoming creatively stagnant.

Finally, I know your readers are wondering if they can buy signed copies of Nightmarriage from directly from me—or am I just imagining this? Either way, they can. I autograph them with a metallic silver Sharpie, and mail them in metallic, silver bubble mailers. Getting one in the mail is like finding a tiny UFO in your mailbox. So readers should really order them for all their relatives, and especially their archnemeses.

You can connect with Chad Thomas Johnston and his social sites via his blog.

Nightmarriage is available via Amazon US and Amazon UK. All images and permissions appear courtesy of Chad Thomas Johnston.